A follow up from this previous post.  Thank you all for all the prayers and love you’ve given us!

Melanie is home, safe and sound.  The kids are doting on her, they missed her so much, and Luke is wondering about Mel’s “hosbidal piwwls”.  Mel’s parents Steve and Kathy are here helping us in a huge way, and a huge relief is on me.

– Doc said that it would be 2-3 hrs long, but it only took 2.  Mel was “pristine” apparently, which is always good to hear from a doctor!
The mass/tumor/thingy was around 9-10″ big, with no weight yet back from pathology (bets on the weight can be left in the comments).  Doc said that the mass was “borderline” which means that it is on the border between malignant cancer and non-malignant cancer.  Because of that, they treated it like it was cancerous, but we are waiting for results.

Joey drove Mel and me to Fairfax hospital, and Mel got all gowned up and ready to, but 2 hours early was almost too much.
She went back at 3:15 or so vs 2:15 as planned originally, partially because there was a typo, partially because Mel had a cold and problems with her ear.  But anesthesia was ok with it, so it went on.  We had Joey come back into the waiting area which livened up the time, and there was also a yuuuge bag Mel brought that I couldn’t carry.  Thanks, Mel.

Right before Mel went back, they gave her the good meds.  But that meant we missed out on funny Mel, which really is a shame…. but there were some Mel-isms later!

Joey, my brother Glenn, and my Mom were all with me in the waiting room.  I was charged with updating both families, and I can’t talk properly anyway, so I wasn’t the most talkative during this time but it was really good to have them there.  Little known fact, my spinal tap and Mel’s surgery all happened when Glenn was in town from Vermont with his whole family – I’m sad to miss that time with him, but Mel’s condition was unforeseen and important!  We also place our bets for the weight of the mass – Joey at 5.2333 lbs, me at 7.25, Glenn at 8.1.  Again, in the comments!

Glenn paid for Panera for me, and then about 530, the Doc came to tell me how it went!!  She was incredibly positive and I had no worries about the procedure or anything.  We were allowed back into recovery to see Mel then.

I know I’m biased, but even after a 2-hour surgery where she’d been under, and the intense trauma and pain she was in, Mel was gorgeous. 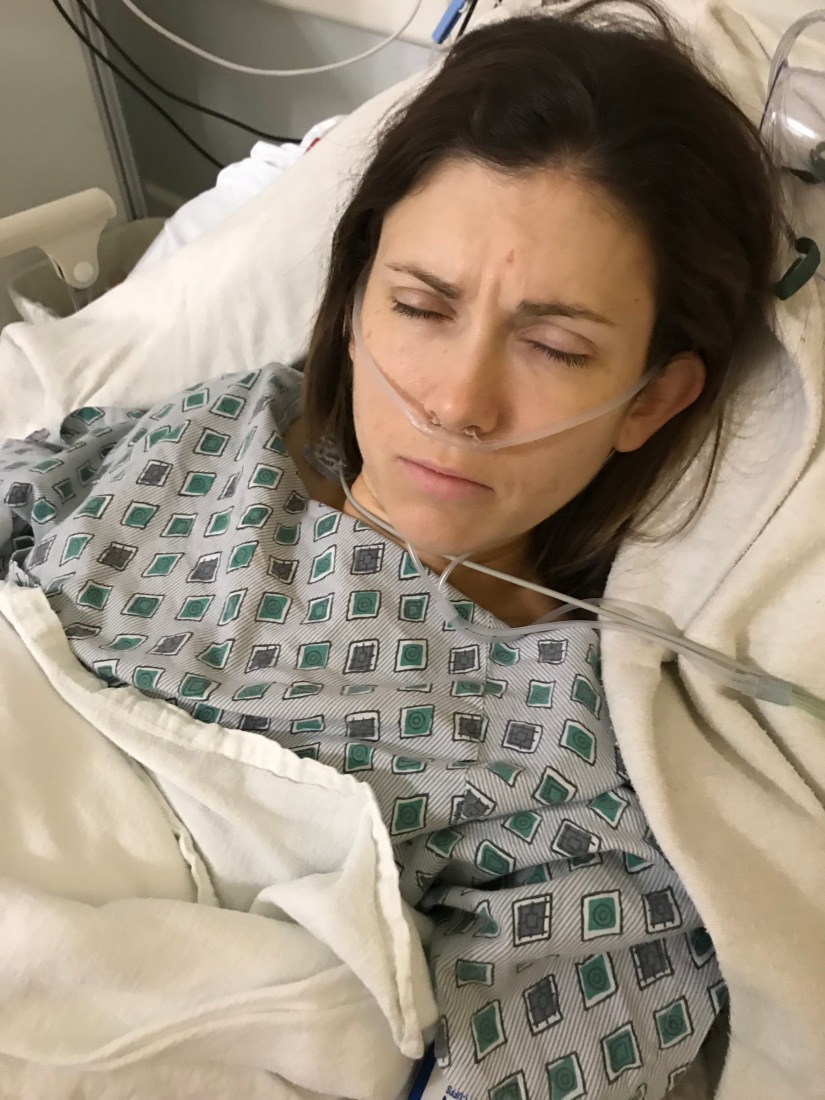 Granted, I’m showing a funny picture because I can, but she’s beautiful!  Mel’s ear hurt and continues to hurt, and her incision hurt a lot.  And during this time I was able to update her on her condition, and that she was cancer free.  Well, a survivor.  Well, borderline, which means she could do the 3k race, not the full 5k (Joey’s joke).

They took Mel up to her room, and Mel’s sister Elena was there waiting for us.  She stayed all night with Mel that night – thank you so much, Elena!

I’m going to skip the other days to highlight something that I need to say because it’s my blog.  I’m unable to do much of anything to help Mel.  I can’t bring her drinks, I can’t help move her in bed, nothing.  So, all the help from family and friends, from company and errands and food, THANK YOU.  I can’t thank you enough- I am useless, and your generosity makes it so that Mel doesn’t suffer for that uselessness.  Thank you!  Mel is home, and doing better every day!