Names are withheld to protect me.

We went up for ALS clinical yesterday, up in “Miram Shah”, in the snow.  Both ways.  And we had a list of questions, we were well prepared.  I even was able to have coffee and breakfast, preventing the ever-present caffeine headache I get on these trips.  I thought Mel and I had a good trip up, we talked about the Covington kids, and the New York and Delaware abortion laws, (Which, by the way, just got introduced in VA.  What is it with Democrats and killing babies?  You can’t argue with me, it’s a thing.)  While some of you roll your eyes or stop reading, these are the conversations I enjoy.  I love discussions about things that really matter, interspersed with the mundane.  So, for me, it was a good drive up!

We Actually got there early!  Early enough to use the loo, get coffee, and joke around.  Not early enough to get called back early though.  But, everything started out really well with the scale lying about how much I weigh, and meeting our clinical coordinator who is always super nice and also helpful.  Then we sat in the round-robin room to await the first appointment. 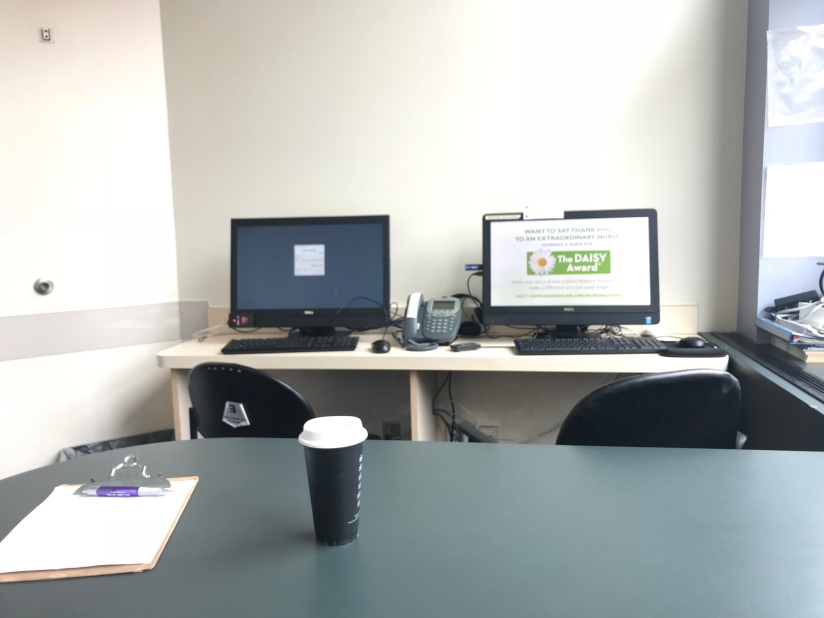 Let me give background.  I’m going to probably die of slow suffocation, a build-up of too much carbon dioxide that I can’t expel.  I am also not planning on a

tracheostomy or a ventilator.  The breathing test serves as the measure of how I am doing.  Oh, but there is more!  I also laugh easily, which makes it hard to create a seal.  Oh, and I just had a mocha, which creates very sticky saliva in my mouth that I can’t get rid of and makes it hard for me to inhale without opening my mouth in weird ways.  A perfect storm!  But yesterday they offered a mask that I thought would be easier.  I was wrong!  I made Mel get a picture as evidence.

More on that later.

Physical and occupational therapy came to see me, and we asked about stretches and home health, someone to come and help me do it a couple times a week.  Guess what though, if I am not improving, they won’t keep coming!  Apparently, there aren’t ALS specialists who will do that.  I don’t blame them, but…

And here is where we took a turn down a bad alley.  Remember, we are in “Miram Shah”.

Ok, I am going to lay this out there.  With ALS, you feel everything.  It’s not like a spinal injury where you are numb.  You can’t move, and you feel the pain of not moving.  You also can’t swallow very well, or talk well.  Breathing becomes difficult, and that is what will kill me.  I personally have weak arms and stronger legs, which also means I can’t reposition myself very easily, or get up or feed myself.  But I have Wonder Woman helping me, and she can’t do the stretches and stuff because we have four kids, whom we love, but can be demanding.  She takes better care of me than anyone ever has, sorry mom, including at hospital when their whole job is to care for me.  Why do I bring this up?

Because the woman of my dreams was treated as if she were trying to kill me off, or sneak opioids, or like she wasn’t taking care of me.  That grinds my gears!

Summary.  Mel had a list of questions from people and tried to ask.  Instead of hearing the questions of an ALS caregiver who is feeling overwhelmed and wondering what is coming next, and how to alleviate pain, they basically gave a lecture.  And when I tried to stick up for her, I got talked over because I sound drunk and everyone does it.  And I effing HATE that!

Then, when I mentioned that I haven’t used the BiPap yet, with caveats like I didn’t want to get construction dust in it, and I haven’t felt like I needed it urgently yet, I was basically told that I would never feel short of breath and I would just die.

Oh, but there is more.  Remember that breathing test?  The mask?  Yeah, I got a 49%. ( Under fifty is like I’m dead, apparently, at least to them, because the whole demeanor of the group was markedly different from before, more like an annoyance than a patient.)  That qualifies me for home nursing and almost hospice.  But when I tried to explain why it was low, thirty whole points lower, they talked over me and assumed it was just the variance in the different machines.

At that point, they lost me, and even though we were there for almost another hour, I was done.  We can’t be the first ALS patient with pain or wondering what comes next.  They have yet to try to suggest a wheelchair for me, thank God I have Jack and Amy!  Otherwise, I would be sitting in the chair I was yesterday, which makes the leg pain worse!  Why do we go up to clinical if they are just getting updates, asking the same questions, and not offering help?  I have been blessed with generous friends and family, I can only weep for those on their own!

We finally left, around one thirty.  We had been there since nine.  We spent four hours on the drive home, and Mel and I discussed this stuff.  Here she was asking questions and getting lectured for it.  I was livid.  I didn’t need my jacket, my anger kept me warm.

So here’s the final point.  I am not doing that bad.  Mel has most everything under control, she is Wonder Woman.  I will have pain, I will seek relief but also offer up what I can.  And we are ok, we are already trying things, we have already thought about things.  A lot of what is going on is because of different aspects of ALS, it’s not like other diseases you may have encountered.  (Save some, muscular dystrophy is probably close but I truly don’t know.)

If I go back, and at this moment it’s if, I will not use the mask for breathing because it is the devil and I felt like I was suffocating.  Given that I have ALS, I don’t need more of that!  I will also have pre-written retorts and demands.  I couldn’t carry the Tobii but I’ll be more prepared.  We might also bring an advocate who can help us be heard.  That will be fun!

Anyway, we got home to a wonderful surprise that I will share later, Mel made steak at my request and I didn’t have any up my nose, I drank an apparently frowned upon beer, and helped get Luke to bed.  He tells me about his day, in a whisper, and tells me about booboos, and it is so wonderful to be a parent, just hanging out with your kids and listening to the world from their eyes.  And even though I woke up so many times last night worrying about my breathing, the memories of kids keeps me going.  And that, Reader-land, is worth smiling about!