Last weekend, I had a huge proud Dad moment.  I’m only going to share one part of this, because I have posts about my kids coming.

On Sunday, after vigil mass, Mel and Jack and I got on the road at seven thirty, and drove an hour down twenty-eight and fifteen to an all boys school.  I can’t even remember the name, but it costs 57,000 per year.  Why?  Hold on, Reader-land, I’ll get there!

I experienced, again, the terror of adults.  We spent an early morning with Jack on the road, and away from the comfort of being near home to eat and drink.  And no coffee.  Then I learned from Mel that apparently I can’t put hot coffee in the feeding hose.

Once home I guzzled two coffees to stave off the headache that had been plaguing me.  Enough about me.

We were there for a competition which Jack wanted to do, we didn’t even make him!  He found it, asked if he could do it, got all the details and practiced relentlessly for it!  This was proud Dad moment one.  Previously, we would have forced him to go out and do things, and practicing would have been… Difficult.

It was a Rubix Cube competition, and it’s fairly epic.  He entered in three categories, three by three, two by two, and a pyramid looking thing they call a pyramix.  His goal was to get a good average of time, not necessarily to win.  Another goal was to socialize and try other cubes. 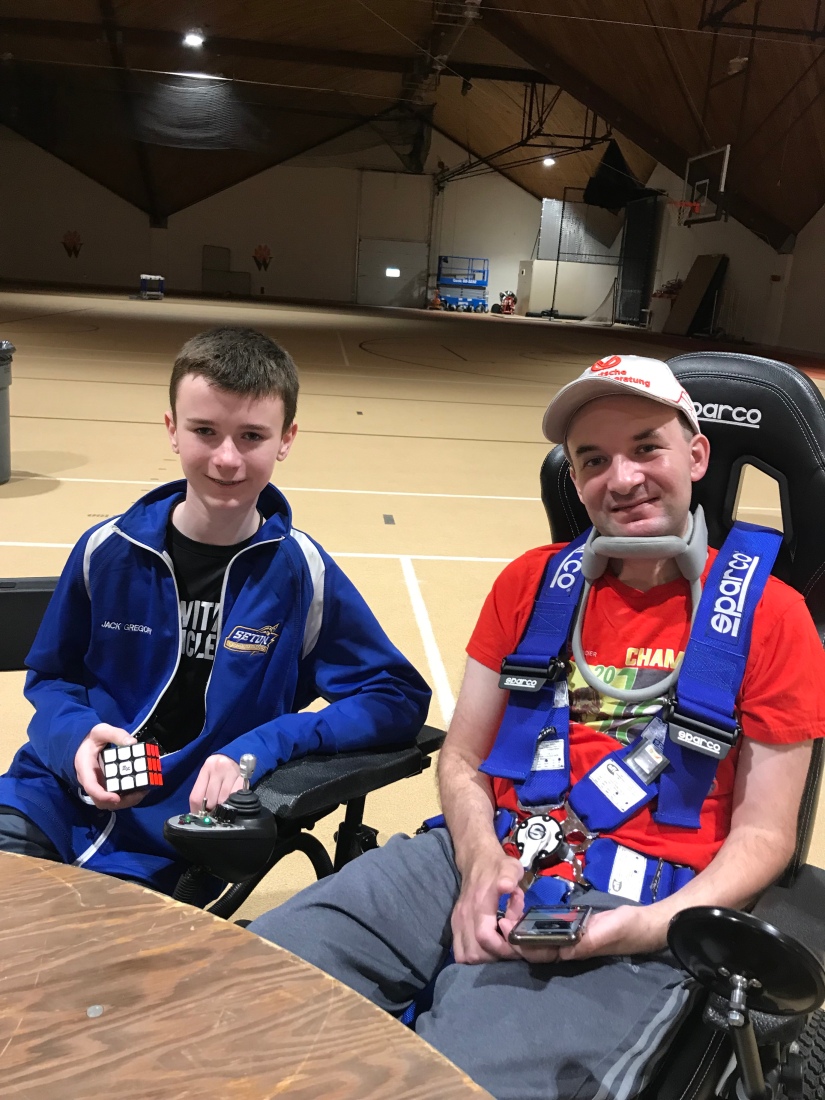 The whole thing was well organized, aside from being remote.  It was in this huge gym , carpeted, ironically enough, with five different basketball courts.  Part of the reason it costs so much I’m sure.  They had long tables with timers set out, I think six or eight, with two stations each.  Then round tables that would seat eight for the rest of us and so they could practice.  We took a spot in the back.

Jack was in group one, and the three by three started.  I rolled up to watch some, and my thoughts…

It was clear that there were two groups and it seemed like the more experienced were in the second group, so his times weren’t going to advance him to the next round.

The other thought was, Jack is really good!!!  He had the process nailed down, knew which algorithms he was going to use, and focused on HIS time, not other people’s times.  This is a good trait to have in golf, so we might be investing in that for him!  And, he wasn’t discouraged by his times either, or distracted by the clock.  I thought he was very mature!

Then there was a break for us, Jack got pizza, and the pyramix was at twelve thirty, after lunch.  And this was proud Dad moment two.

Jack’s pyramix was illegal for the competition because of the awesome carbon fiber stickers on it.  He didn’t know beforehand, so it was an honest mistake.  We told him to go ask if he could borrow one, but he shut down and panicked.  So we decided to head for home.

On the way home, Jack said that he was mad at himself because he was too nervous to go and talk to people.  Pay attention, a twelve-year-old thought about what he did wrong, narrowed it down, assessed the weakness, and admitted fault.  Without prompting.  Heck, I still don’t admit fault.

I’m super proud of him.  I am glad he’s growing into such a man!

After some research, I found that I CAN have coffee in the feeding hose.