I had just left mass at all Saints, turned on Elliott in the Morning, and I was driving to work at Hechts in Tysons Corner.  Elliott was trying to figure out what idiot had hit the Giant Building in New York.  People were calling in and they didn’t know exactly what happened, so there was the usual laughter.

Then the second plane hit.

By the time I got to work the Pentagon was hit.  The stores were empty.  Susan, my coworker, couldn’t get in touch with her family in New York.  The entire mall shut down by two, and I stayed overnight to patrol the store in case there were looters.

Any post-apocalyptic movie pales in comparison to what Tysons looked like that whole day.

Elliott stayed on the air for hours and hours, and to be fair, was a uniting voice.  He’s annoying but I always tolerate him because of that day.  I was glued to the TV, watching as the towers fell and my world changed.  And Elliott kept us company.

A lot has changed.  I changed my career path to fight against terrorism.  I nearly enlisted twice, once while patrolling around that same Hechts.  And I have learned a lot about things, things that might make your hair stand on end.  But this day always hits hard.  The truth is, it should hit everyone hard.  A man intentionally attacked civilian targets to send a political message.  That in its purest form is called terrorism. 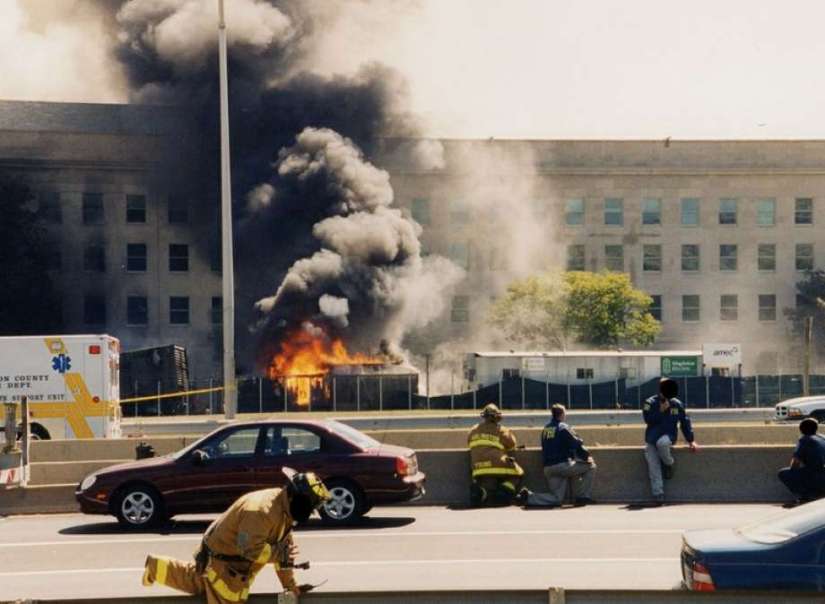 It’s not the first time it’s happened and won’t be the last.  There are different ways of dealing with it too.  One, to understand the underlying issues, work to a solution with a rational counterpart, and avoid future events.  Two, to bend the knee to the demands, to surrender.  Three, to lash out in anger in an ill-conceived war.  Four, to understand the underlying issues, and in lieu of rational counterparts, to fight to ensure it doesn’t happen again.

The concept of a just war is not just a Catholic thing.  But, the Catholic Church has good guidelines on what a just war is.  But what is important here, on this day, is to speak truth.  “Some people did something”  is incorrect.

I often talk about Don Quixote, and my sister Celeste and I were

discussing it recently.  Did you know that the author, Miguel de Cervantes, was nicknamed the “manco de Lepanto”?  No, you didn’t.  He lost the use of his left arm in that battle.  The name means the lame man of Lepanto.  That battle, it’s funny, but it is one of a series.  The first, Covadonga in Spain.  Then, Poitiers.  Next came the siege of Vienna, then Lepanto, then the second Vienna, called the Battle of Vienna.  All are Christian victories over a more powerful muslim force.  The unifying theme?  Prayer.

The fifth response to a terrorist attack is one of faith and prayers.  Not in a pacifist sense, but of putting your faith in God and praying to do the right thing.  The other unifying theme is that those people fought.  Beware wolves in sheep’s clothing who tell you that it isn’t worth fighting for.  If they had surrendered, the Church would continue because the gates of hell shall not prevail, no matter what CNN says.  But it would be dangerous and small.  But they fought, and those who couldn’t were asked to pray, and on Oct 7, 1571, they prayed the Rosary!  And that is the weapon for these times, especially for those of us like me who are unable to do anything else.  It has been and should be first in the fight and always in our pockets, ready for action.

It took eighteen years and a terminal disease to mellow me out and be able to write this.  I knew the history, I just didn’t think about the unifying prayer that makes sense of it all.  Only fighting or diplomacy without faith will get you a human solution, or worse, a weakling Neville Chamberlain solution.  To do nothing, or capitulate in the face of evil.  And the attack on 9/11 was objectively evil.

I know other people don’t feel the same way as I do, many want to sweep it away as inconvenient or overdramatic.  But I still know, and I remember.  The point of history is to learn from it, not sweep it under the rug as outdated.  And I and my family will remember!