Ok, I’m blatantly stealing this from Catholic Stuff You Should Know, because you might not listen, and you NEED to hear this!  So I’m blogging it.

The Catholic sickness.  In 82, Ratzinger put a book together of his essays from when he was a teacher.  In the 19th century, psychologists started pointed out that Catholics don’t have joy, because they have an obsession with authority and sex.  And that then leads to sadness and total Catholic guilt.  Ratzinger says that if we focus on these two things, we lose ourselves and our own ability to love.

So this is heavy stuff.  First, we have to understand is that the underpinnings of Christian thought has been collapsed and rebuilt over the ruins by philosophers who do not have a foundation in the Gospel.  Kant, Hagel, Descartes, Hume, broke down the pillars then followed up by Freud, Marx, and Nietzsche.  Modern thought is built on these philosophical thoughts, and Christians are included in this.

But the message of Jesus is joy, Evangelion, Good News!  So are Catholics obsessed with authority and sex?  Are we so focused on them that we lose ourselves and deny love?!  Ratzinger says that if we focus only on those two things, it warps our learning of the faith.  But wait, we are in the middle of a YUGE crisis of authority and sexuality!  What do we make of the sexual abuse by clergy, and the blatant abuse of power in the hierarchy?

These guys are way better than me at explaining this whole thing.  But, Reader-land, I will do my best to link in –  authority is tied to obedience, sexuality is tied to chastity, there is something there that should stick out as being missing.  Do you have it?  They are called the Evangelical counsels!!  Poverty, chastity, obedience.  Let’s break them down. 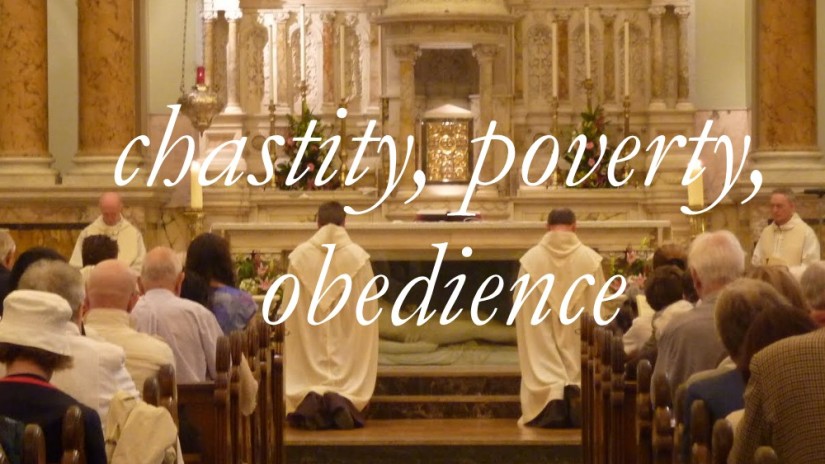 The three evangelical counsels or counsels of perfection in Christianity are chastity, poverty (or perfect charity), and obedience.[1] As Jesus of Nazareth stated in the Canonical gospels,[2] they are counsels for those who desire to become “perfect” (τελειος, cf. Matthew 19:21, see also Strong’s G5046[permanent dead link] and Imitatio dei). The Catholic Church interprets this to mean that they are not binding upon all and hence not necessary conditions to attain eternal life (heaven). Rather they are “acts of supererogation” that exceed the minimum stipulated in the Commandments in the Bible.[3]

Catch that last part?  Doing more than the minimum.  But the counsels aren’t something you do by yourself!  That is egotism, and that is the mentality that leads to the Maladie Catholique!  To live the counsels we have to surrender ourselves, the glad tidings are to get away from ourselves!

Freud focused on controlling sexuality, Marx the economy and greed, and Neitsche over obedience.  And they color all of modern thought, we are playing their rules, when the rules that Jesus gave us are liberating because we are not controlled by ego, and the focus becomes on God!  Not having to live trying to live up to our own ego.  And in that is true sainthood, the focus on God, doing good for GOODS sake, not because we have to because it’s the rules.

Oh man, Reader-land, I got so excited when I heard this that I had to share.  I’ve butchered it so badly, so listen to it yourselves!  Start at minute seventeen, and you will hear what got me so excited.  If you only listen to one of my recommendations, this is the one!!!