We are back from Massachusetts, and hoo nelly was it a trip.

Let’s start with the reason for the trip: the bone marrow harvest.  So, Wednesday 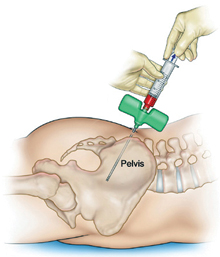 morning at 0900 they stuck me with a needle and sucked out 100ml of bone marrow.

But let’s talk about how we got there!

First of all, our brother-in-law gave us a ride to the airport, as well Mel’s sister and kids came to watch our kids while we were out.  Cousin Time!  And the drive in was very easy, very fast… poor Joey, as soon as he dropped us off the skies opened and massive thunderstorms hit.  Providentially, he was ok.  Our flight wasn’t delayed, either, which was good because we needed to get to UMass to get one more blood sample for HIV before the harvest in the AM.  More on this later.

In the plane, right as we are taxiing to the runway…. like 3 SBDs (silent but deadly) from (probably) right in front of us!  And they were TERRIBLE.  So bad in fact that it became the title of this post.  Who DOES that?  Look, I have ALS, and I don’t fart on planes.  Let that be a good mile marker for what you do and don’t do on planes!

The rest of the trip was fairly uneventful.  A delay at the rental car counter.  Loud talkers on the plane.  Traffic coming out of Boston… All normal, and we got to UMass right at 730pm like I thought we would.  And the blood was drawn, no problemo.

Then we went to the hotel.  Well, we stopped and grabbed McD’s before getting there but we went to the hotel.  Now, we have been trying to not spend a ton of money on our trips.  So, when I booked everything later than normal, I was still looking for a deal so I found one sort of nearby the hospital, and it didn’t seem terrible from online.  The Quality Inn, it’s a chain, it couldn’t be terrible, right? 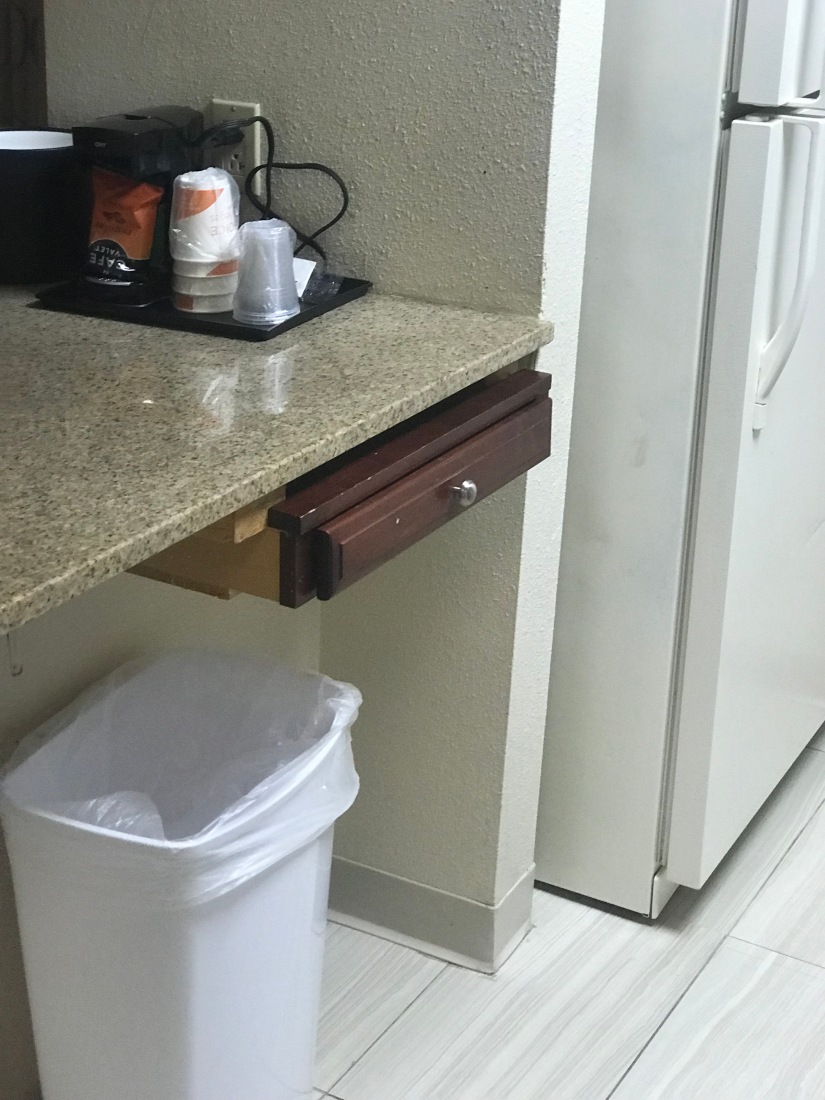 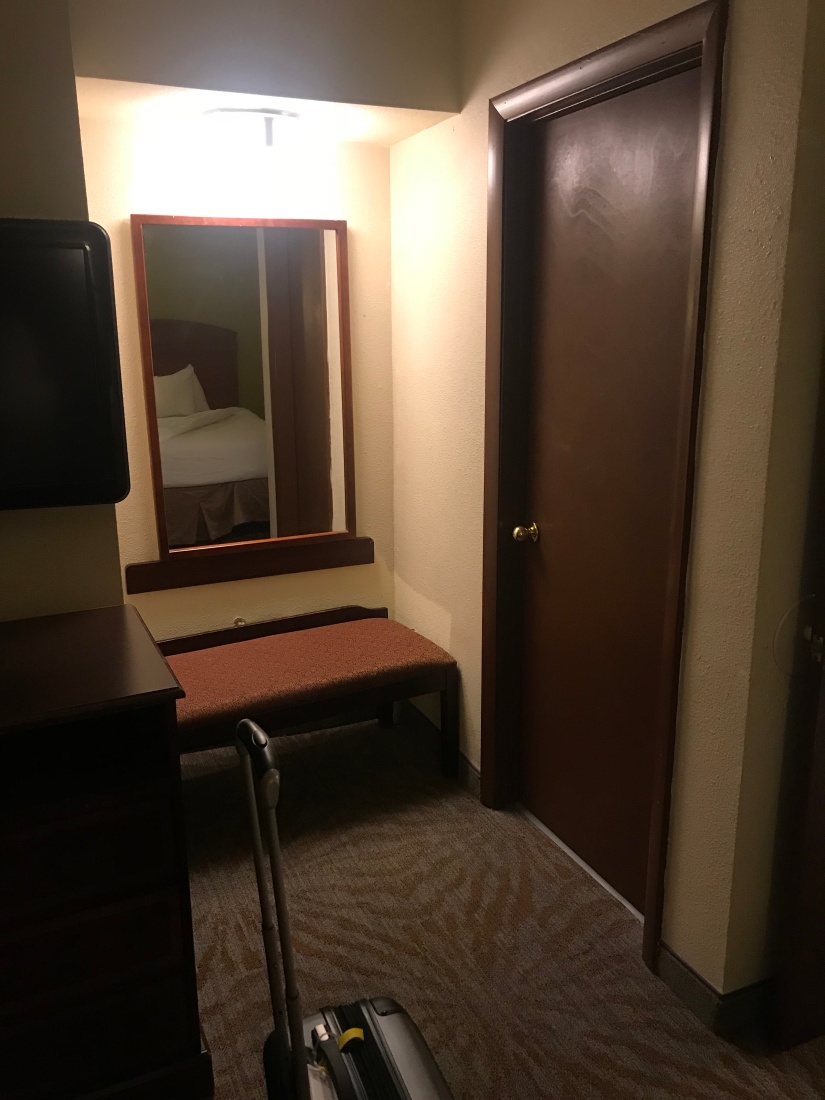 Well, I’ve stayed in worse hotels, but not by much.  By like, a coffee pot in the room.  We rolled into the clerk talking about her “bitches”, a family in the lobby in fuzzy slippers, a funny odor in the air.  Basically, in person, it looked nothing like the interwebs.  Mel, poor  Mel, was such a trooper and we checked in, were upgraded to a suite with a kitchen, coffee pot, two TVs… in a room with a drop ceiling and visible grime/dirt.  I felt so bad.  I had chosen the hotel, I was late with booking, this was al my fault.  And Mel was visibly shaken by the whole thing.  Poor Mel.  At this point, I started looking at other hotels, and from a request from Mel to go somewhere else, I found a different place.  I’m no hero, I got us into that mess and had to pay to get us out!

When we checked out, 20 mins after we checked in, we let the clerk know that we were going to stay a little closer to the hospital.  I’m fairly sure we may have been closer in the new hotel?  Maybe?  Then we got the heck outta there.

Anyway, we went back to the area we stayed in the week before and found a Marriot linked hotel.  It will be the hotel Mel stays at for any other overnights we have – she earned it!  To paraphrase Mel, luckily I got the HIV test before we went to that first hotel!

The next day was fairly easy, actually- we met Diane and Catherine in the waiting room, went up and got signed in (and I feel guilty for not proudly saying ‘Catholic’ when the check-in lady was saying they ask everyone that but it’s not required), and went back to the pre-op room. 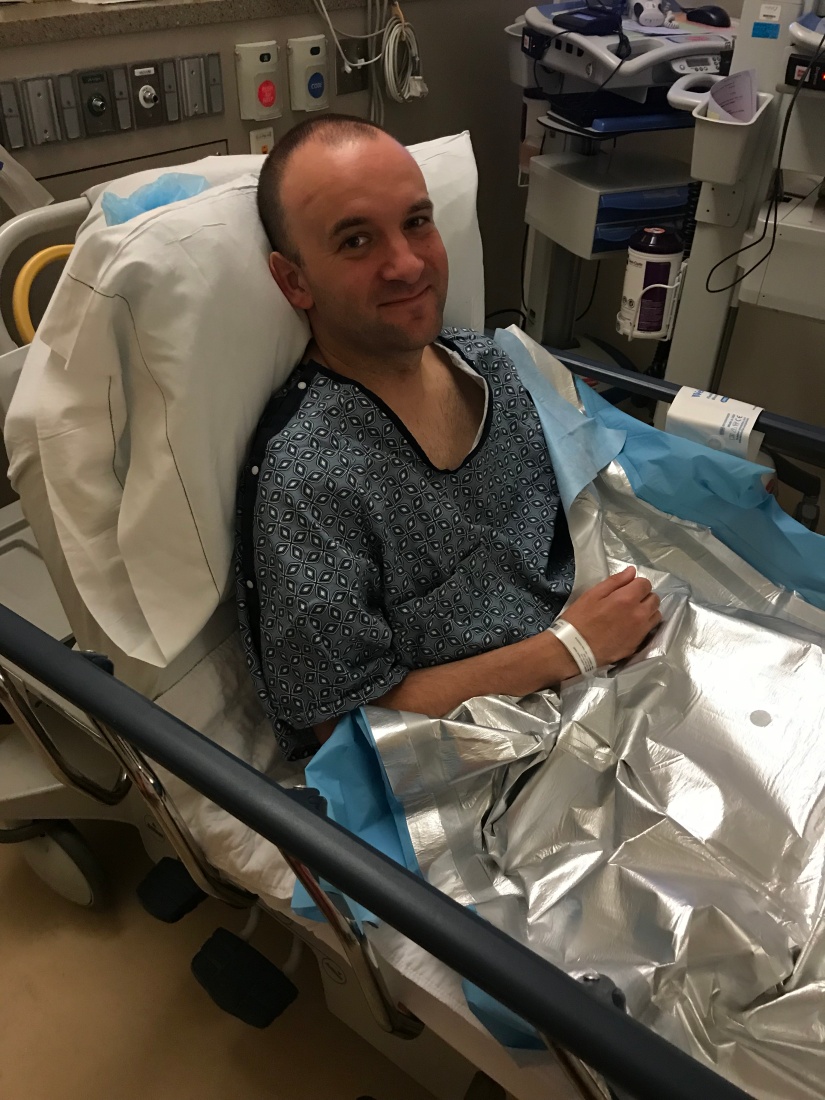 I really liked the Nurse Maura, the anesthesiologists, the doctors, everyone was awesome.  But what I really liked was the “Johnny”, the backless hospital gown.  it’s never out of style.  (end sarcasm.)

Fast forward, they used my PICC line, got me on the table, I was out like a light and woke up at 1120ish.  And then nurse Maureen took care of me (she was so nice!) and I met the head of the Study Dr Brown.  Maureen told me no driving or alcohol for 24 hours… but then didn’t hear anything when I said I wanted a beer!  She was awesome, I have a special place for her, and she got a hug as I left.

Then we hit Volturnos for a delicious Italian sandwich and beer :). Then, off to the airport where I also made up for no coffee by having 2 espressos and a coke! 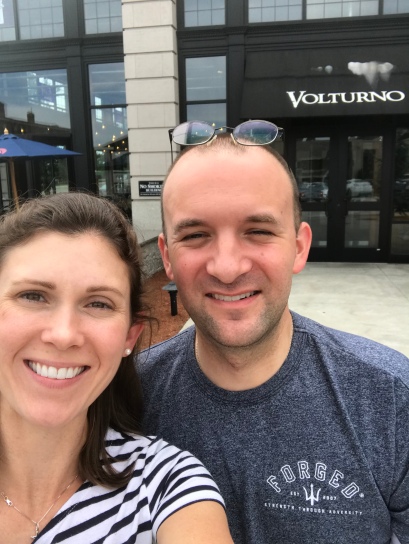 Then there was a dude in the women’s restroom.  And the flight attendant couldn’t understand me.  And Joey picked us up back in DC when the traffic was stopped because of the Wilson Bridge closure.

And all I am is bruised, not broken.  Well, and tired.   But now in July for the spinal tap and hopefully the drug, not placebo!