“If any of you put a stumbling block before one of these little ones who believe in me, it would be better for you if a great millstone were hung around your neck and you were thrown into the sea.”

To the unfaithful clergy, and laypeople.  I share with you one thing that I also share with your faithful brothers: the Truth that Jesus gave us, Himself, no less, does not change with the times nor does it violate the natural order created through the Word.

I am so angry that I must be cautious. 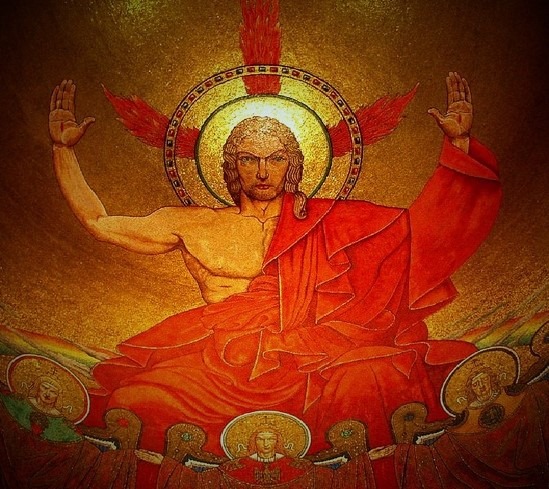 The first two stanzas of the Dies Irae, a chant based on Zephaniah 1:14-16, a reflection on the final judgment.  I want this chanted by men at my funeral, with a translation for anyone in attendance.  It is often on my mind, lately, since I am probably closer to death than most.  But it is on my mind more, due to this situation.

First, to you unfaithful, I forgive you, knowing that I also am a great sinner.  Praise God that the Faith is Perfect, even while we are imperfect. On top of this, I don’t know who among you is unfaithful, save for some, and I await and encourage a full and complete investigation.

Second, you have betrayed your trust.

I call you unfaithful not because you are sinners, but you are obstinate in your sin, and you glory in your shame.  Yes, Philippians 3: 17-19, St.  Paul could be talking about you.  And because we’re Catholic and you probably don’t know the Bible;

17 Brothers and sisters,[k] join in imitating me, and observe those who live according to the example you have in us. 18 For many live as enemies of the cross of Christ; I have often told you of them, and now I tell you even with tears. 19 Their end is destruction; their god is the belly; and their glory is in their shame; their minds are set on earthly things.

Hear the word of the Lord, O people of Israel;
for the Lord has an indictment against the inhabitants of the land.
There is no faithfulness or loyalty,
and no knowledge of God in the land.
2 Swearing, lying, and murder,
and stealing and adultery break out;
bloodshed follows bloodshed.
3 Therefore the land mourns,
and all who live in it languish;
together with the wild animals
and the birds of the air,
even the fish of the sea are perishing.

4 Yet let no one contend,
and let none accuse,
for with you is my contention, O priest.[a]
5 You shall stumble by day;
the prophet also shall stumble with you by night,
and I will destroy your mother.
6 My people are destroyed for lack of knowledge;
because you have rejected knowledge,
I reject you from being a priest to me.
And since you have forgotten the law of your God,
I also will forget your children.

7 The more they increased,
the more they sinned against me;
they changed[b] their glory into shame.
8 They feed on the sin of my people;
they are greedy for their iniquity.
9 And it shall be like people, like priest;
I will punish them for their ways,
and repay them for their deeds.
10 They shall eat, but not be satisfied;
they shall play the whore, but not multiply;
because they have forsaken the Lord
to devote themselves to 11 whoredom.

Wow.  I don’t know about you, but that is strong stuff.

“If any of you put a stumbling block before one of these little ones who believe in me, it would be better for you if a great millstone were hung around your neck and you were thrown into the sea.”

I will go one more;

34 You brood of vipers! How can you speak good things, when you are evil? For out of the abundance of the heart the mouth speaks.”

What you have done is taken places of honor in churches, lorded over those you should be serving, and corrupted the most vulnerable so that you could satisfy your flesh, sexually and comfortably!  Your success in fundraising and gaining political status has blinded you to Truth!

That, or perhaps you never believed in the Truth.

It’s quite possible, given the world.  We’ve seen more killing and destruction in the last century that many could wonder where God was.  And the relativistic take from those in education didn’t condemn evil and praise good, instead they were helping people find “their truth”.  No… I don’t even blame you for not believing.

But you did more than just that.  You used a fair form to rise in the ranks, gathering power, then using it to fuel your corruption, knowing under canon law you might well become untouchable.  I shudder to think if you found like-minded people as yourselves and raised them into power as well, or foisted your unbelief on younger generations.  That is the accusations against you!

I wonder, in this world, what did you stand to gain?  Power?  Fame?  Riches?  Sexual playthings?  Did you join the clergy because it was easier to rise to power here, instead of in the corporate world?  A form of cowardice, perhaps?  Big fish in a small pond, perhaps?

Or, please God, you joined to share in the work of salvation, and lost your way?  I pray that is the case.

Laughably, I wonder if you sought to actively change or destroy the Catholic Church from within?  If this is the case, I laugh at you, and mock your master, for it won’t happen.  Many wicked clergy before you have tried.  I pray this is not the reason.

At what point did you think what you were doing was wrong?  Why cover it up?  In a world that is insane, you could claim progressive values and you will be lauded!  You still can be!  Why, unfaithful ones, do you stay in the church?  You could leave, taking your money, your influence, your titles and robes, and you could be ministers to a new rising religion that does not condemn your actions!  You can do it, and the Catholic Church will remain, poorer but freed from a corrupt group.  Surely you realize that you can’t win?

So why do you stay?

I hope there is a small part of you that realizes the Truth, and that is why you stay.  Perhaps the extreme act of cowardice that you show by not leaving is your conscience, letting you know that it’s wrong.

That is why the Dies Irae is on my mind.  Ultimately, while the song is foreboding, it is a call for mercy, a plea for clemency at the last, even though we are sinners.  It is a song of hope.

But you don’t have mercy without penitence, and a firm purpose of amendment!  What you have done is public, and your penance must be public!  If you think you can undo what has been publicly outed in secrecy and hiding, it won’t work.  My Faith is not shaken, but my trust in the ministers has crumbled!  You must bear the humiliation for the great wound you have caused!  And make amends!

Or leave.  If you do not believe, leave.  Take your money and friends and power and prestige and go!  Take your whitewashed tomb away, give up the hypocrisy and live as you will, not as a liar.