Hello there, Reader-land!  It’s Friday after a Massachusetts trip, which means it’s time for a recap. First of all, let me just say that this week has been eventful in many ways.  But that’s another story.  This story is about the second infusion of Brainstorms NurOwn drug, infused into my stem cells and injected into my spine.

With this trip, there were many emotions.  Will I pass out?  Will we get stuck in traffic, again?  Will I be able to move after?  Will my hamstrings get tight and sore again?  Do I notice any improvements?  Do I even want to do this anymore?

The truth is, it’s exhausting to go to UMASS for this stuff. The plane is cramped, the car ride is cramped, the schedule is all off at home, and I don’t know what is going on with my body.  Add in Mel’s pain, especially since she’s getting over major surgery, and I feel extra bad.

Mel is my faithful companion, she never complains, even when she can’t understand me, and she can make me laugh so hard I almost poop my pants!

But this time, well, we weren’t going to fly out of DC, no, we flew out of Dulles!  And Mel brought a transport wheelchair!  Do you know what that meant?  It meant Mel had to walk to the farthest gate in Terminal C, after going up and down elevators and getting on and off underground trains.  All while pushing 137lbs of me, and carrying our stuff.  Gosh, when I write that down I feel even worse.

But they seem to be nicer at Dulles than National, at least the United crew.  We arrived and the lady at the counter saw us, then without asking, upgraded us from Coach to a better seat!  Then let us board early!  Take that, American Airlines, who don’t let customers with disabilities board early!  So, may I say that the flight was fantastic.

A second change of normal itinerary was that we flew into Hartford, not Boston.  A smaller airport with fewer delays!  And people were polite, it was so nice!  We had to take a small shuttle bus to the rental cars, and after a few minutes of the ramp not working, they finally got me in.  This was the first time I did a wheely in the transport wheelchair when the driver accelerated from stoplights!

They upgraded our car to an SUV free of charge, probably because of the wheelchair.  And we were off, no Ted Williams tunnel, no honking, a totally different experience.

Connecticut was a breeze, it seemed, and so we crossed the line into Massachusetts………

We reached UMass, and were shown back.  Everything was faster because we knew the routine.  This time I got to keep my pants!

My brother Glenn drove down from Vermont to visit and give company to me in my procedure,

and we spent the waiting time quoting Tomics, Monty Python, and songs.  I believe Mel was mortified!

It’s also nice when other people see the ALS physical evaluation.  I don’t know why, but it’s nice when others can see that you can’t lift up your arm or puff out your cheeks.  Side note, I guess.

Diane and Cat, the study members who I meet with normally and who take good care of me, told me that it would be easier this time.  I had a different anesthesiologist this time,

and a young nurse anesthetist, who promised me I’d be ok this time.  Then Karen and Lisa came in, and they wondered if I was going to give them a hard time again (they were my nurses for the first, eventful, lumbar puncture.)

You pass out in the operating room ONE TIME…

We got back, they put headphones in to distract me, and the nurse anesthetist was holding my hand the whole time.  She was telling me what they were doing, step by step, so when I had pain I knew what was going on.  This doesn’t help me, and even though they gave me something to keep my heart rate going, well, it hurt.  Not sciatic nerve hurt but the site of the LP hurt.

Let me say this.  You women, you are superhuman.  One, having a baby is the most painful thing, and I am grateful God made me a man.  But on top of it, some of you get epidurals!  Are you insane?  It’s like, yes you are repeatedly kicking me in the nuts, but you know what, why don’t you take a branding iron to my spine for good measure?!?!!

Anyway, wimpy Joe didn’t pass out this time.  And they got me out and to the SAME room I was in last time!

And you know what?  It was uneventful.  Mel brought me coffee and a Chipotle quesadilla, and I was asleep by 2130. 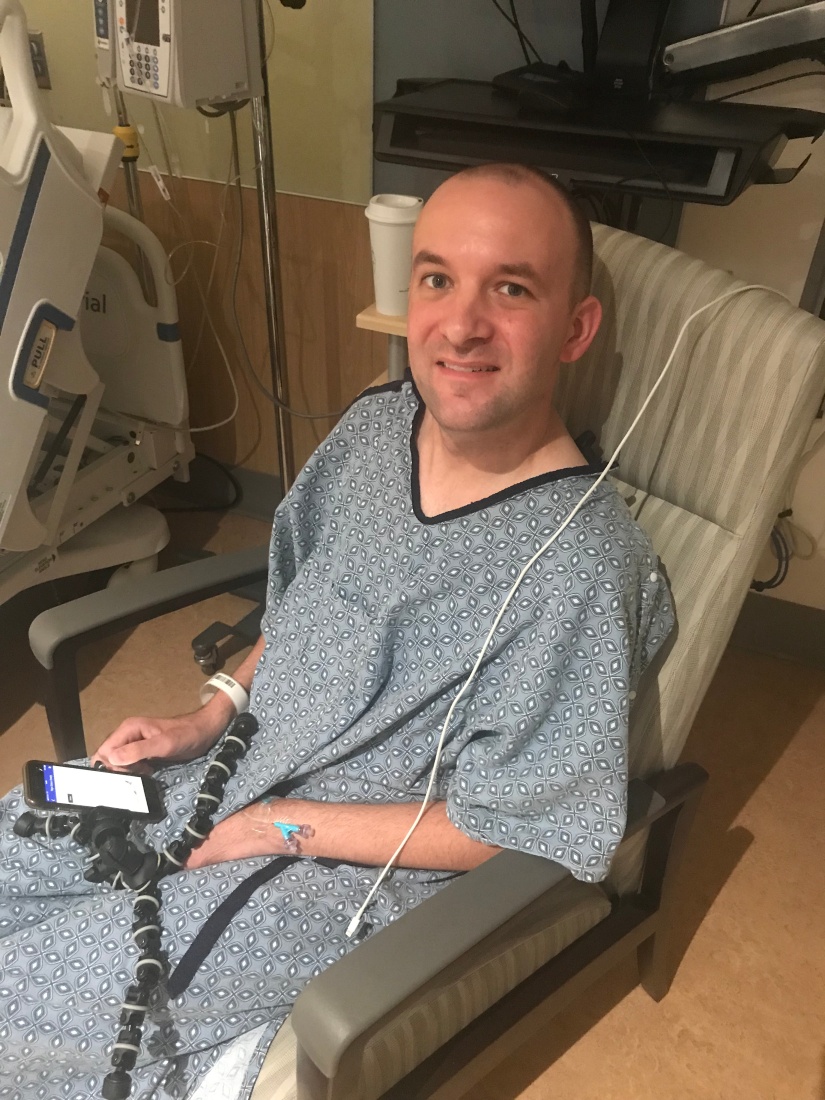 Mel stayed in the room with me this time, and really we just waited to be discharged.  Kinda boring, really.  Poor Mel, I am afraid she suffered much.  She did get to finish her book though!

We were discharged around 1500 Thursday, and drove back down to Hartford airport for a 1950 flight.

Got some McDonald’s, because I can’t eat much, talked about men with long hair, and how I could grow mine out and what it would look like.

It was here where I almost pooped myself.  I have ALS, and Mel is funny, what’s your excuse?!

Anyway, going to the restrooms to ensure that would not happen, I encountered a gentleman vomiting loudly there.  Well.  That’s nice.

And at the gate, they tried to upgrade us again, because of the wheelchair, and wheeled me down the ramp, gently, so that Mel didn’t have to.  Such nice people in Connecticut, not like Logan airport where no one cares!

And the pilot even got us to Dulles 30min early!

My brother-in-law Tommy was there to pick us up at Dulles, and it took all of 20 mins to get home!  Thank you Tommy, and take that, National Airport!  There was a surprise waiting for us at home, for another post.

At this point, however, I was exhausted, my back and hamstrings were killing me, and I felt really guilty of making Mel go through all that.  It really is a hard trip, and Mel does all the driving, she does all the pushing, walking, talking, getting food, making sure I’m ok, and she slept terribly in the hospital.  As hard as I think I have it, it’s way harder on her, and she doesn’t complain!

So that was the trip!  Not too much in this one, with some extra posts bonuses!

5 thoughts on “Infusion 2 is in the books”